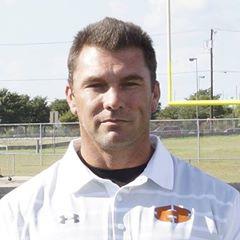 I'm Jason Halliburton, Hutto's Head Strength & Conditioning and Physical Education Coach. I'm entering my 7th year with Hutto ISD and 15th year as a strength coach bringing a wealth of experience and success which the Hippo Nation.
Prior to arriving at Hutto, I had coaching stints at the collegiate and high school level. As a Graduate Assistant Strength Coach for Dan Eason at Stephen F Austin State and under Master Strength Coach Rod Cole at Tarleton State. I designed and implemented strength programs for Men’s and Women’s Cross Country and Track, Men’s Basketball, Baseball, Softball, and Football.
At the high school level I have been a strength coach along with coaching football, track and powerlifting in Texas and California.

Some of my accolades consist of:
---Made 3 consecutive football playoffs appearance at Yucaipa HS, California; 2007, 2008, 2009 & produced 3 All-Conference Safeties

---Developed a speed and strength program that earned me a spot on the 2008 U.S. Men’s Bobsled Team.

I graduated from West Liberty State (WV) with a Bachelor’s in Criminal Justice in 2001, earned my teaching credential from Stephen F Austin in 2005 and earned my Master’s in Kinesiology from Tarleton State in 2012.